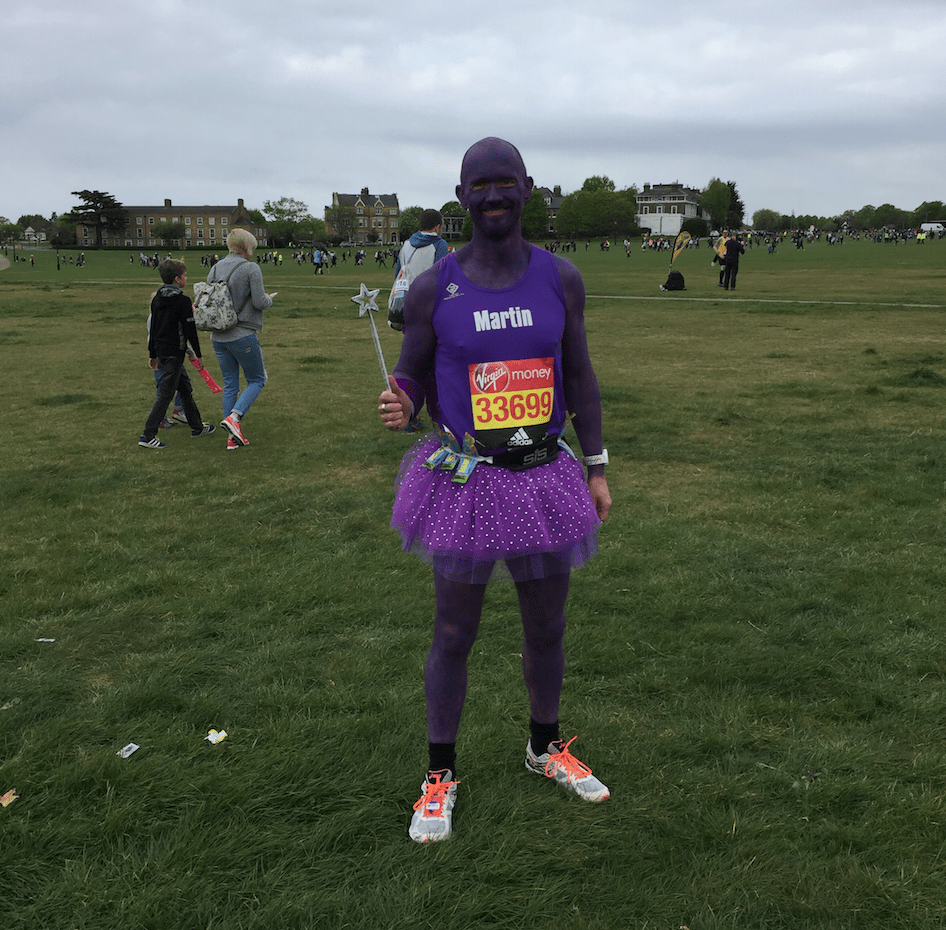 The morning of St George’s Day, 23rd April 2017. And, after 945 miles of running over 16 weeks of training, it was all about the Virgin London Marathon for guest blogger, Martin Hulbert.

After a great first six weeks of training, I have only managed to complete two fully planned training weeks since the middle of February.  This, as I have said in previous blogs, has really messed with my confidence.

I started off with three targets:

Under 2:55 would be a very good day (but probably unachievable)

Under 3:00 would be great for my personal pride as that would be seven years in succession under 3:00

Under 3:15 would be worst case scenario as that gains me a Good For Age place next year.

As we left the hotel, which overlooks Blackheath Common, for the pre-race group photographs, we got a lot of attention as everyone running for Wishes4Kids were wearing fairy wings and tutus, plus four of us were also painted purple.

We were asked to pose for photographs by various strangers on the walk over to the Red Start. This is where we leave most of the other runners and I head over, with the supporters, to the Fast Good For Age start.  This start is virtually exclusively for men aiming to run under 3 hours.

‘After adjusting my wings, I headed off to the starting pen’

I had a wander around to see if there was anyone I recognised, before dropping my kitbag onto the baggage lorry and heading out of the start area and onto the warm-up field. I did a couple of half-arsed jogs around the field, before joining my wife and the other supporters from the charity by the start line barriers to kill a bit of time. After a few adjustments to my wings I headed off to the starting pen, waiting for the off.

As the start time neared, I was chatting to various people in the starting pen, comparing target times, training and how and why I run in fancy dress. You could see that most people were nervous or pumped up. I seemed to be relatively calm, which I always think means that I am going to enjoy the run as I am not putting any pressure on myself. My only fear was that the quality training runs I had missed may come back to bite me in the latter stages. However, only time would tell.

We were let off at just after 10:01 and due to the number of runners on this start, I didn’t cross the start line for two minutes. I was then away and running; a quick look and wave to the right to see my wife and the rest of the charity supporters and off in to London we headed.

The first three miles of London are fast as they are net downhill. I decided to settle into an effort that felt easy and sustainable, knowing that the pace would come out slightly faster due to the downhill. I completed the first 5km in 20.24. I don’t check my splits by kms but as the marathon tracking app does, it is easier to use these in my blog instead of my mile times.

‘I was high-fiving kids and playing to the crowd’

After the 5km mark, the different starts merge. As they do, the space gets a fair bit tighter and it is often harder to follow the racing line, blue stripes painted on the road. Also, at this point I was more focused on running along the edges of the road, high-fiving kids and generally playing up to the crowd. I knocked off the second 5km in 20.52 and then settled into a more comfortable rhythm.

My next splits were: 21.04, 21.04 and 20.55 to just after half-way. By this point, Tower Bridge, probably the highlight of the race with the wall of noise hitting you as you cross, had been ticked off and I was still feeling good and running at a consistent pace. The injury I have had for about 10 weeks now wasn’t causing any issues and I probably didn’t feel any adverse effects during the whole race. I passed the half-way mark in 1:27.57 meaning that I was comfortably stuck between a 2:55 and 3:00 finishing time, as long as I could maintain a similar pace for the second half.

Running towards Docklands and on to Canary Wharf I still felt good and was still trying get the crowd going, knocking off 25-30km in 20.44 and 30-35km 21.05. From about 30km, my quads started to tire and for the first time in the race it started to feel like hard work.

I had passed local runner Ash Payne, well on course to break the world record of running the fastest time dressed as an Elf. I also found that although my pace was slowing a little, I was still passing people.

The run along the Embankment was tough. From 35-40km my 5km time slowed to 21.34. I was still trying to wave my wand to the crowds as much as possible, but it was getting harder to smile to the supporters.

‘I took my GoPro and videoed the final 800 metres’

As I got to Big Ben and turned right onto Birdcage Walk, I knew that my wife and supporters would soon appear on the right side of the course. As agreed, when I reached them, I took my GoPro camera from my wife so that I could video the final 800 metres. Providing a bit of waffled commentary while trying to rouse the crowd for the last time I headed towards Buckingham Palace, under the 400 metres to go sign, turning right towards The Mall to be greeted by the ‘385 yards to go’ banner (26 miles completed).

As I turned into The Mall, I could see the finishing gantry and at this point I decided, while still talking to the camera and waving to the crowd, to have a final sprint finish.

I crossed the finish line, looked up and waved to the cameramen in front and stopped my watch on 2:57.04 – and one very happy fairy!

I slowly walked forwards and collected my medal, the women giving them out were very appreciative of my outfit and make-up. After collecting my medal, it is a long, sore walk along the rest of The Mall to collect my bag from the final truck.  The logistics of the day never cease to amaze me, getting bags from almost 40,000 runners from one side of London to the other, hardly ever any delay in getting your bag when you get to the lorry and every single volunteer smiling and chatting when they get the chance.

After chatting to a few local runners, comparing times and experiences (and having water tipped over my head – thanks Chris Langham) and being interviewed by London Marathon TV and the race commentator (good charity publicity) it was wandering back across the park to my wife, posing for further photos along the way.

The London Marathon never disappoints.  The camaraderie amongst runners, the volunteers, the crowds shouting encouragement to random strangers for hours on end; it makes you feel that the world is a good place.  Roll on next year.  I’ll be back!