Guest Blog: The London Marathon is just hours away, but will Martin beat the three-hour mark? 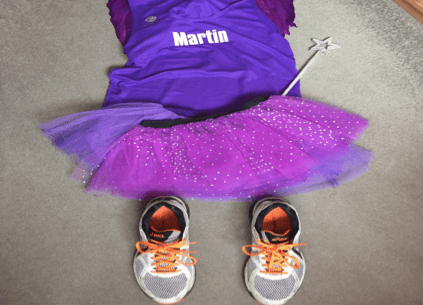 Guest blogger Martin Hulbert has been keeping us up-to-date with his build-up to the London marathon for six months. Now the day has finally arrived, will he managed to hit his running targets?

After 16 weeks of training, plus the ‘base’ running in November and December, it is all over and London Marathon race day approaches.
It hasn’t all gone to plan, but then there is always the potential of issues arising over a quarter of the year when you are pushing your body towards its physical limitation.

…was mainly about cycling. I ran three times on Monday and Tuesday and then realised that the soreness in my left leg was going to require some rest to stop it getting worse. I dusted off my bike and from Wednesday to Sunday, reluctantly cycled each day to keep my fitness levels up while taking the impact out of my training.

As is usual when forced to cross-train, it was a windy week which makes the cycling feel so much harder. However, by the end of 114 miles of cycling over the five days, my leg felt almost back to normal and hope had risen once more.

…should have been the start of my usual three weeks of tapering. However, having missed five days and an important 20-mile run I was less than confident of my ability and continued to train as normal. After a visit to see Tom at Function Jigsaw and a final bit of treatment to my foot and shin, I felt ready to run again.

I ran an easy four-miler on Monday and while my leg didn’t feel 100%, it was no longer sore. Confidence rose again on Tuesday with a 5.7-mile Running Buddy session and I headed into the evening club run full of smiles. That was until I started running that evening. Within 100 metres my leg was sore again, the same issues that had plagued the previous weeks. I persevered but my confidence had taken a massive hit. I continued with my weekly running and on Saturday attempted an ‘all or nothing’ run for my confidence.

Instead of the 20-miler I missed last week, I decided on running 16 miles with the first 14 miles at my marathon pace heart rate. Sticking to this roughly I managed to run 14 miles at an average of 6.44 pace with no issues in my legs at all. Confidence rising again, even if not fully, enough to know that a sub 3-hour finish at London should be achievable.

…was now about tapering. This is usually the period of time that affects me mentally as I usually think I have every injury and illness going. However, this year I have been far more relaxed (my wife may say different). I think this is to having all of the injury issues and not knowing what my training points to.

On Monday and Tuesday I ran over the fields and canal towpaths around Wigston and Newton Harcourt. Both runs were at a relaxed effort and pace and once again there were no issues with my leg. Had the tough 16-miler ran the injury out of me?

Thursday was also the first time back at Manor Road track (more likely trail running nowadays) and 12 x 300m reps. I pushed hard and was pleased with both the pace and consistency of the reps and then finished off the week with my final double-figured training run before London. I ran the same route as this same run last year to give me some sort of comparison. I finished with an average pace 15 seconds per mile slower than last year with a slightly higher heart rate. That is understandable with the issues I have had and the important runs I have missed. However, it was well within sub-3 hour range. It is now all about staying healthy and not doing anything stupid!

…began with two runs including 3 miles at marathon pace in the middle of them. Easter Monday was a 6-miler and Tuesday was 5 miles. Both of these were faster than planned with a lower heart rate. All good so far. Wednesday and Friday morning were easy effort (for me) 5-milers as part of Running Buddy sessions. A little later on Friday morning I did my final run of training, an 18-minute run consisting of 5 minutes steady, 1 mile at my marathon pace heart rate and 6 minutes easy to finish. All done, no issues and nothing else I can now do.

This year has been my most frustrating of the 11 years I have been running the London Marathon. I have never really had injuries other than with muscles where you can put a timescale on recovery. It has been tough at times and there were points, especially in weeks 12-14, where I wasn’t enjoying running due to the soreness whilst running. I have never seriously considered deferring my place until next year and always kept hoping that the time spent stretching, Active Rolling, sitting on a hockey ball and using a TENS machine (none of which are pleasant in my eyes) would be beneficial and allow me to at the very least enjoy the race.

I think that I am now in that place. I knew a long time back that a PB was out of the window so quickly revaluated my targets and will go into Sunday with the following three:
A-Target – Sub 2:55 (tough)
B-Target – Sub 3:00 (hopefully doable)
C-Target – Sub 3:10 and keep my Good For Age place for 2018 (sounds like a commitment to do it all again)!

Thanks for reading and I’ll report back next week when it is all over……well until the Equinox 24-hour race!

Read more: Will a persistent leg injury hamper Hulbert’s hopes for a PB?