From China to France and Italy, Team GB skiers have had a fantastic few days with a raft of top 10 performances at World Cup level including a number of personal best performances.

There were three top 10s at the Halfpipe World Cup in China with Peter Speight leading the charge with a career-high of fourth, while Dave Ryding (Slalom) and Tyler Harding (Slopestyle) also put in their best performances of the season.

British Ski and Snowboard performance director Dan Hunt said that the results are a positive way to end 2017, with the hope of bigger and better things to come in the new year.

“In the past week we’ve had a podium in Cross Country skiing, top tens in Alpine and Freestyle and a couple of other career-best performances,” said Hunt. “Things are pointing in the right direction, but January is a big month and there’s still a lot of work to do.

“It’s less than seven weeks until PyeongChang and we want the athletes to be trending upwards at this stage, so it’s pleasing to see some impressive performances and results across all the disciplines.”

Molly Summerhayes finished ninth in qualifying, an agonising 0.8 points away from qualifying for the ladies’ final, however her performance was an improvement on the 11th place she achieved on World Cup debut in France nearly three years ago.

Peter Speight and Xander Glavatsky-Yeadon picked up the final two places in the men’s final after qualifying ninth and tenth respectively and the best was still to come.

Speight improved on every run, progressing from sixth, to fifth and finally fourth, impressing the judges with solid grabs and amplitude. While his third run score left him less than two points off the podium, he still recorded the best-ever result for a British male in Ski Halfpipe World Cups.

“My skiing came together today and I’m really stoked to be have been able to step things up in finals,” Speight said after Friday’s event. “I’m not getting ahead of myself as it’s just one result but I’m really happy.

“I’ll be looking to build on this going into the rest of the season and keep stepping things up.”

The 23-year-old skied into seventh in his first run but dropped a position after crashing on his final two efforts.

Read more about how to prepare for your ski trip.

Ryding put down a solid first run to sit in 10th, three-quarters of a second off the lead.
He then sent down what ended up being the fourth-fastest second run to rise four places into sixth.

Ryding’s second run was over half a second faster than Austrian Marcel Hirscher who took victory, with the Brit finishing less than a quarter of a second from top spot on the podium.

The result matches his third best-ever World Cup finish, only bettered by January’s second at Kitzbuhel and fourth in Stockholm.

** On Wednesday, Alex Tilley continued her good week in Courcheval, qualifying 12th to move into the ladies’ Parallel Slalom knockout phase. Unfortunately she was eliminated in the round of 32, but her impressive qualifying run backed up her Giant Slalom from Tuesday when she recorded a career-best 13th.

Harding qualified third in his heat yesterday to move into the 16-man final and sent down a solid first run to sit in seventh position. Unfortunately he lost a ski during what was to that point an impressive second run, dropping to eighth but the result was a breakthrough performance.

Following the event, Harding said he was “hyped to get eighth in my first World Cup finals this year. Big thanks to everyone who helped make this happen.” 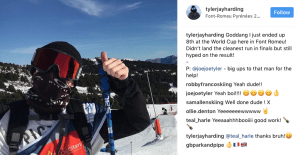