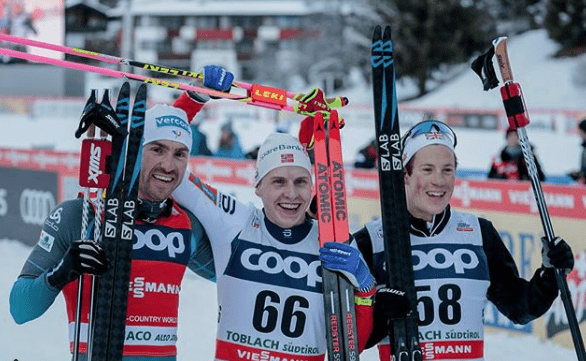 The fantastic winter for British Ski and Snowboard keeps rolling on with another World Cup podium over the weekend, this time in Cross Country skiing courtesy of Andrew Musgrave.

It was the sixth British World Cup podium so far this season with the others coming in Ski Slopestyle, Snowboard Big Air and Telemark skiing.

There were also top 10 results at the Dew Tour for freestyle skiers James Woods and Isabel Atkin along with a number of strong results in other events across Europe.

FIS Cross Country World Cup – Saturday 16 & Sunday 17 December – Toblach ITA
Andrew Musgrave powered to third place in the 15km free skate event at the World Cup in Italy on Saturday in a result he described as the best of his career.

In the interval start format, Musgrave had the fastest split through the first 8.5km but was eventually overhauled by Norway’s Simen Krueger and France’s Maurice Manificat.

The result gave him a strong starting position for Sunday’s 15km classic pursuit and Musgrave was with the leading group through the first two 5km circuits. However the gruelling pace told in the end with Musgrave slipping off the back to finish 12th.

Andrew Young started the pursuit in 87th but improved that significantly to record a faster time than more than a quarter of the field.

Musgrave is one of the athletes Function Jigsaw has been recently asked to support.